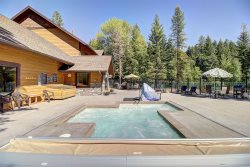 Lagopus leucura is also known as the Snow Quail

Native to United States and Canada, the White-Tailed Ptarmigan is also known as the Snow Quail. Its the smallest bird in the grouse family.

Habitat - where does it live?

This Ptarmigan makes its home in high altitudes on or above the tree line and is native to
Alaska and the mountainous parts of Canada and the western United States. The White-Tailed
Ptarmigan was introduced into the Wallowa Mountains in Oregon and the Uinta Mountains in Utah.

The plumage is rather cryptic and varies at over the seasons. Speckled in gray in summer and white during the snowy winters.

Its nest is a simple depression in the ground in which up to 8 eggs are laid. After hatching, the chicks soon leave the nest. At first they eat insects but later move on to an adult diet.